Table Of Contents show
1) How can I tell when bats are in the house?
2) Do I have to maintain or clean my bat house?
3) How many bat houses should I put up?
4) A baby bat fell out of the bat house. What should I do?
5) Are there laws or restrictions in the USA against putting up bat houses?
6) How effective are bats at controlling insects?
7) How many bats can potentially occupy my bat house?
8) When do bats hibernate?
9) How high should the house be?
10) Will bats harm people, pets, or birds?
11) What do bats eat?
12) Should I clean my bat house?
13) Where should I place my bat house?
14) What about rabies?
15) Build or Buy a Bat House?
16) Do I have bats in my area?
17) What should I do with the bat guano?
18) How do you attract bats to your new bat house?
19) Are bat boxes a good idea?
20) Do bat houses attract bats?
Why would I want to attract bats? Bats are a sign of a balanced ecosystem but are often considered pests. While having them take up residence in your home isn’t ideal, they can still be of great benefit if you install a bat house. Attracting bats provides numerous benefits to the environment and your garden. Bats can pollinate plants, distribute seed, feed on mosquitoes and other annoying insects, and discourage them from nesting in your home. As an added bonus, bats will be pollinating and feeding at night when they are most active, so you don’t have to come into contact with them if you don’t want to. There are certain telltale signs that bats have inhabited your home. Common signs include: If you think that your home may be housing a few extra residents with wings, consider installing a bat house  as an alternative to them residing in your home. 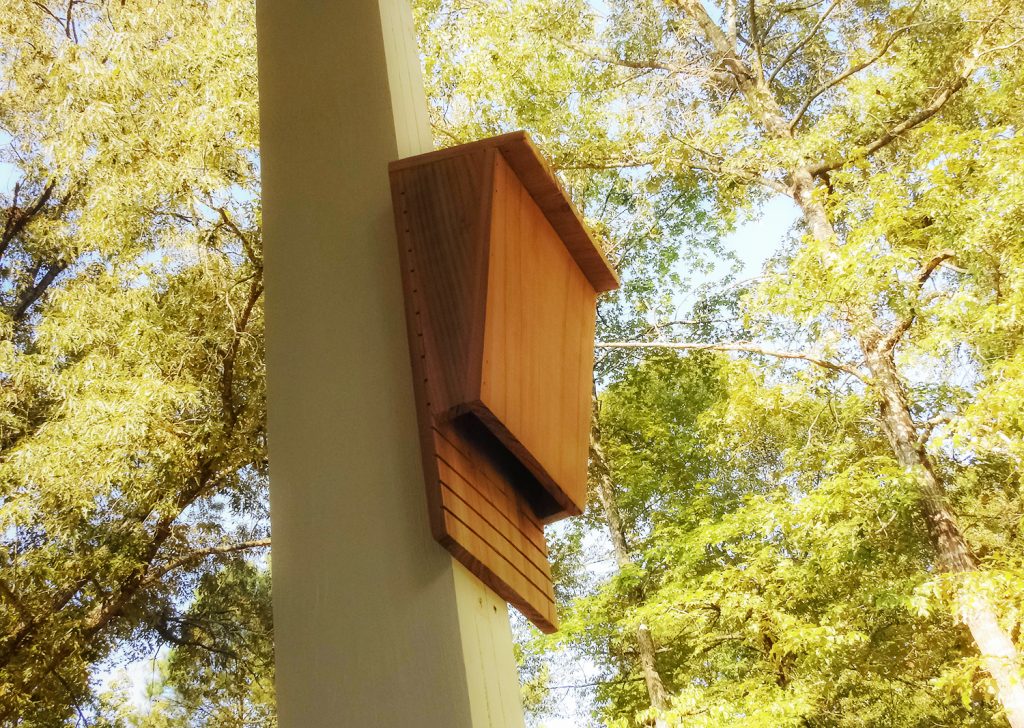 1) How can I tell when bats are in the house?

The most telling way of knowing your bat house is occupied are finding bat droppings around the house. You can also try to observe the bat house at night during their most active time to see any bats leaving or coming into the house. It is not advisable to look into it or reach into the house directly. Although bats do not usually attack, they may if they are provoked and disturbed.

2) Do I have to maintain or clean my bat house?

Maintenance and cleanings of the bat house is essential and should be done AT LEAST once a year, but monitored as much as possible (a couple times per month). Bat houses are prone to leakage, drafts, deterioration, and possibly overheating. If your bat house does not meet the standards of bats, the whole purpose of the bat house is defeated. Remember to do any maintenance, cleaning, or repair work when the house is unoccupied.

3) How many bat houses should I put up?

Depending on how many bats are in your area, you can set up several bat houses on your property. It is best to take into consideration the proximity of resources they will use such as water. Each bat does not need its own house. Bats live in colonies and prefer to house together. There can be up to several hundred living in one house! Living together is also a form of conserving heat by having many bats in one house, so don’t feel like you need to open a bat neighborhood.

4) A baby bat fell out of the bat house. What should I do?

Try to gently capture the bat and put it in a box or container and put it near a heat source so it won’t be cold. NEVER handle bats with bare hands. Always use gloves. It is then suggested to monitor it for possible injury or illness while you call your local wildlife rehabilitator or rescuer. It is very important to let the professionals handle a baby bat to reduce injury or illness to yourself.

5) Are there laws or restrictions in the USA against putting up bat houses?

There are no laws or restrictions in the USA against putting up bat houses if they are on your own property. If you want to install one on public property, you must get permission from a designated representative.

6) How effective are bats at controlling insects?

Bats love to eat mosquitos that’s is why they call them nature’s mosquito police, certain worm species, beetles, moths, grasshoppers, and other pesky pests and are a natural form of pest control for your backyard. Each bat can eat several hundred to thousands of insects every night.

7) How many bats can potentially occupy my bat house?

Bats live in colonies and prefer to house together. The amount of bats that occupy a bat house depends on the number of bats in your area and the size and condition of your bat house. For areas with high bat populations, large bat houses that are clean and in good condition can have several hundred living in one house! Certain bat houses that are purchased for consumers have room for about 50-100 bats. 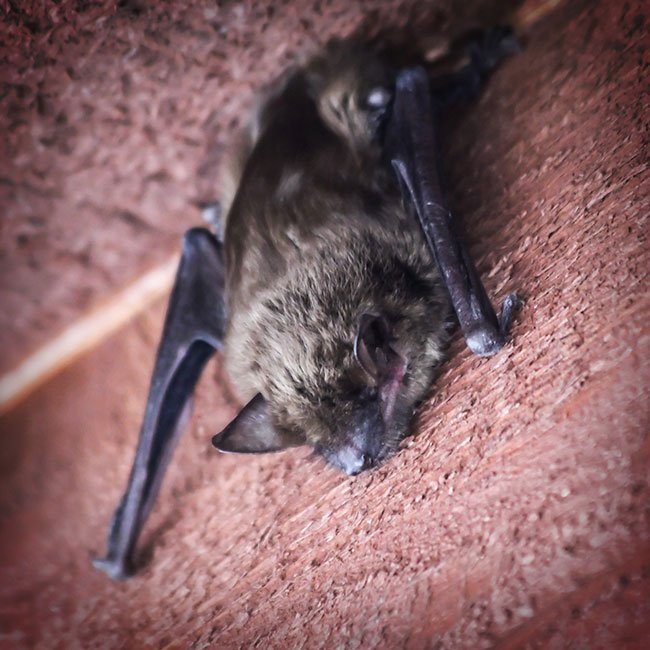 8) When do bats hibernate?

Bats typically hibernate from fall to early spring (October to April). Many choose to hibernate in dark and secluded places such as homes, buildings, caves, hollow trees, barns, attics, crawl spaces, and mines. Many types of bats hibernate in groups. Their bodies conserve as much energy as possible during this period of time and loses much of its body weight.

9) How high should the house be?

Bats are the only mammals that fly. So, of course, the bat houses should be higher where they are most comfortable. It is also helpful to protect them from potential predators who will come knocking. Bat houses should be at least 10 feet above the ground, but preferably somewhere between 12 to 20 feet. It should also be 20 to 30 feet away from trees so they can be near them, but not too close to aerial predators or in the shaded.

Mostly all bats do not seek out people, pets, or birds to harm, but may if they are disturbed or attacked. It is important to only clean or repair the bat house when there are no bats inside.

In the United States and North America, most bats eat mosquitos, certain worm species, beetles, moths, grasshoppers, and other pesky pests. Certain bat species prefer fruit, nectar, and pollen. They can act as pollinators in certain regions with certain kinds of plants. Some even drink sugar water just like hummingbirds.

Bat houses can be cleaned around wintertime when the bat house is empty. This will extend the life of the bat house significantly and prevent any formation of wasp nests inside the house. Other than monitoring the bat house monthly and cleaning of any nests and weatherproofing techniques, bat houses are pretty low maintenance.

13) Where should I place my bat house?

The bat house should be placed strategically for optimal occupation. It should be near a water source, at least 10 feet above the ground, in an unshaded region. It should stay at a temperature that is not too cold and not too hot. Usually, houses facing south or southeast do well. It should not be right next to a tree or anything that will block sunlight or provide opportunities for predators to get in.

The number of rabies cases has significantly decreased in the past several decades due to the increase in domestic animal vaccination in developed countries in North America. The amount of fatalities in the United States has dropped to about one death per year. Therefore, the risk is very low, but still should be considered. It is a good rule of thumb to exercise extreme caution when encountering a sick or dead bat. It is best to call your local wildlife center for help.

There are many ways to build your own bat house and plenty of tutorials and step-by-step instructions online. However, if you do not have the time or skill to build your own bat house, one can be purchased for an affordable price. There are even bat houses that you can buy (or build) that have a flooring that allows the droppings to fall through, allowing you to clean up without disturbing the actual bat house. If you are building your own, take time to consider the design and construction of the house. If your bat house is insufficient, it will not be attracting bats.

Bats live all around the world. There are many types of bat species that live in the US and Canada. Less so in urban areas compared to rural areas, but you may still be surprised if there are bats living in your backyard or building without you even knowing it! The most common species of bats that will occupy your bat house in the US are the Big Brown Bat and the Little Brown Bat. You can also research your specific area to find out who is in your neighborhood.

17) What should I do with the bat guano?

Bat guano is another word for its droppings. Some bat guano can be used for fertilizer, but some bat guano can carry dangerous pathogens and attract roaches and mites. There is a disease called histoplasmosis that can be contracted from coming into contact with the Histoplasma Capsulatum fungus, which is the fungus found in the droppings of an infected bat. Because of the possible health risks that come with coming into contact with bat guano, it is best to call a professional wildlife control center.

18) How do you attract bats to your new bat house?

Put your bat house in an optimal location to encourage occupation. It has also been theorized that having night-scented flowers such as evening primrose or honeysuckle will attract moths, which will attract bats. It is NOT advised to spread bat droppings in or around the new bat house. There is no evidence to support this method and it can increase the risk to histoplasmosis.

Bat box benefits far outnumber the possible disadvantages. The key is to be knowledgable about the possible risks, which will in and of itself greatly decrease your chance of injury or illness.

Location is the most important aspect when attracting bats to bat houses. If the bats cannot find your bat house, it will be empty. Installation on high areas of buildings or poles is a great choice, whereas you’ll probably find less occupation if it is mounted on a tree, for example. If there isn’t a water source nearby, it most likely will not be as popular as one that does have a water source in close proximity. For further reading on the benefits of bats and bat conservation please visit batcon.org 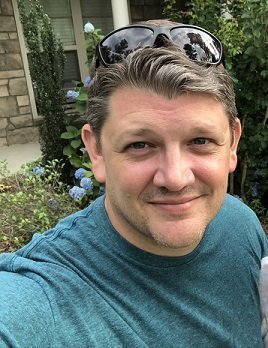 Hello! I am Robert, owner of NatureZedge. We strive to develop and provide you what you need to make the most of your garden or back yard. By providing all-natural and organic products, we can help you increase the productivity of your garden and also make your outdoor experience more fulfilling.

*Keep in mind to give you the most all-inclusive content possible and how-to guides that we may occasionally use affiliate links in which we receive commissions when you click the links and make purchases. However, this does not impact our content or establish bias. We try our best to keep things as informational as possible in order to help you grown the plants, flowers, herbs and vegetables of your dreams.

Do You Want The Latest Exclusive Content and Savings Delivered?

Save 10% Off On Your First Purchase!